Taking on a controversial foreign client has always been delicate business for Washington lobbyists. But the K Street powerhouses who get big money to represent the Egyptian government are finding out just how messy that can be.

On Dec. 29, Egyptian security forces raided the offices of 17 foreign-based groups, known as nongovernmental organizations, including the National Democratic Institute, the International Republican Institute and Freedom House, all of which receive millions of dollars annually in U.S. government funding.
Continue Reading
Computers, documents, cellphones and even tens of thousands of dollars in cash were seized from the groups, and their employees were questioned by Egyptian authorities. Some employees were threatened with prison if they didn’t cooperate with Egyptian officials.

The raid was condemned at the highest levels of the U.S. government. President Barack Obama complained about it during a phone call last week to Field Marshal Mohamed Hussein Tantawi, the head of the military council running Egypt.

But Egypt has its own well-connected friends in Washington. They include three of the more powerful Washington lobbyists: former Reps. Bob Livingston (R-La.) and Toby Moffett (D-Conn.), along with Tony Podesta. The trio split a $90,000-plus per month lobbying contract to represent Egypt’s interests in Washington.

The lobbyists quickly mobilized to provide Egypt with political cover, touching off a behind-the-scenes battle between K Street interests and U.S. officials — with potentially huge implications for the critical U.S.-Egyptian relationship.

A lobbyist working for the Livingston Group immediately circulated talking points — which some Capitol Hill insiders suspect were drafted by Egyptian officials in Washington — claiming that the IRI and NDI were operating outside Egyptian law. These lobbyists vehemently opposed any calls for cuts in U.S. aid to Egypt. The United States gives Egypt roughly $2 billion per year in aid, mainly as military assistance. 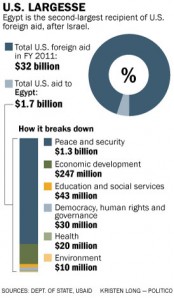 “[There] are foreign NGOs working in Egypt without being licensed by the Ministry of Foreign Affairs and Ministry of Social Solidarity. Under this category falls NDI and IRI,” the talking points stated, which were obtained by POLITICO. “No organizations, entities or individuals, national or foreign, should be allowed to operate outside the law.”

In an interview, Livingston insisted that he was not defending what the Egyptians did, but he said he has a duty to his client to get its message out, no matter how unpopular it is.

“If Egypt has a position, we have the obligation to relay their position. And we do that,” Livingston said. “But we do not counsel them on how to defend against this. And I don’t defend it.”
Read more: http://www.politico.com/news/stories/0112/71852.html#ixzz1kQrUiYP0
“They’ve got to explain why they did it, and they are explaining why they did it, and we will relay their explanation,” Livingston added.

IRI, NDI and Freedom House have pushed back hard, with help from their own high-profile supporters. Sen. John McCain (R-Ariz.) is the chairman of IRI’s board of directors, while Sam LaHood, son of Transportation Secretary Ray LaHood and a particular target of Egyptian ire, runs its program there. Former Secretary of State Madeleine Albright is the head of NDI’s board, with former Senate Majority Leader Tom Daschle (D-S.D.) serving as a vice chairman.

“I think what’s concerning about this, about where we are right now, is you have American citizens being hauled into the Egyptian Ministry of Justice and questioned, interrogated, and at the same time, you have American citizens — lobbyists — lobbying on Egypt’s behalf,” said Scott Mastic, IRI’s regional director for the Middle East and North Africa. “It’s very distressing.”

“I think a lot of people were very angry to see Livingston up here lobbying for the Egyptians after all this,” said a congressional source close to the issue. “Some people up here are pretty pissed.”

Both IRI and NDI had submitted registration applications to the Egyptian government as foreign-based NGOs in the mid-2000s. The Mubarak regime never approved the applications, despite repeated requests from the groups that it do so. So both organizations were technically operating in violation of Egyptian law but only because the Egyptian government did not move on the registration applications that would have brought them into compliance with regulations.

“To be prosecuted now strikes us as 100 percent political,” said Les Campbell, who runs NDI’s Middle Eastern program. “This is more about what is happening in Egypt, and we’re caught in a Catch-22.”

Campbell said NDI and IRI are very mainstream organizations with no history of problems operating in foreign countries.

“Nothing like this has ever happened to us before. It’s pretty shocking,” Campbell added.

And the controversy is not going away. After a State Department official tried to downplay the raid and its impact on U.S.-Egyptian relations during a subsequent visit to Cairo, Sen. Patrick Leahy (D-Vt.), who chairs the Senate Appropriations Committee panel that doles out foreign aid, sent a private letter to Secretary of State Hillary Clinton to complain about those remarks.

Rep. Frank Wolf (R-Va.), a member of the House Appropriations Committee, is circulating a letter calling for a cutoff in U.S. economic aid to Egypt. Ten senators, including Illinois Republican Mark Kirk, a member of IRI’s board, told Tantawi last week that they would move to block Egyptian aid unless the NGOs were allowed to reopen, which so far hasn’t happened.

Instead, Egyptian officials have gone the other way, proposing a law to crack down on foreign organizations inside their country. They also have continued to keep the IRI and NDI offices closed.

The yearlong funding bill passed by Congress in December includes language stating that the Egyptian government must show it is “supporting the transition to civilian government including holding free and fair elections; implementing policies to protect freedom of expression, association and religion, and due process of law.” Clinton is required to certify to appropriators that these goals are being met.

Several sources close to the issue believe that IRI and NDI are being used as pawns for the upcoming congressional debate over U.S. support for Egypt. Egypt has been a key partner for the United States in the Middle East since the 1979 peace agreement with Israel, but the fall of Mubarak, the rising power of the Muslim Brotherhood and other Islamist groups whose candidates dominated Egypt’s recent parliamentary elections, and the Egyptian military’s continuing control over the country are troubling to many in Washington.

All of which leaves Livingston, Moffett and Podesta in a difficult place.

Livingston is a former chairman of the House Appropriations Committee. He was in line to be speaker after Newt Gingrich’s retirement from Congress in 1998. But in a tearful speech on the House floor, Livingston admitted several extramarital affairs and resigned from Congress.

Moffett served in the House from 1975 to 1983 before losing a Senate race. Podesta is the brother of John Podesta, the former White House chief of staff under President Bill Clinton who served as the head of Obama’s transition team back in 2008.

“We play — we being the consultants — play what I regard as a very important and sometimes very tricky role in that we don’t try to justify things that are done or have been done,” Moffett said. “I think it’s an important role and keep your eye on the ball [in Egypt]. The ball is moving toward a legitimate democracy. We may not like the democracy entirely, but most of what is happening are victories for our point of view.”